How do wind turbines work?

How do wind turbines work?

January 31, 2022
What is a wind turbine and how does it work? It converts wind energy into electricity – but how effective is a turbine compared to other technologies?

Wind energy is the most common alternative energy source. How do wind turbines work, what parts are generating electricity and where are the biggest wind farms in Europe?

What is a wind turbine?

Green energy is the future – our resources of fossil fuels are limited, and we will probably run out of non-renewable energy sources in 50 years. For now, natural gas is the most eco-friendly fossil fuel. It is a ‘bridge’ between renewable and non-renewable power.

Switching to carbon-neutrality is important and we still have a long way to go. Besides, the effectiveness and the impacts of renewable energy are not black and white either. There are pros and cons of wind energy too.

How does a wind turbine work?

As the wind blows, it starts rotating the blade-shaped propellers around the rotor, spinning the engine of the windmill, therefore generating power.

There are two kinds of wind turbines: 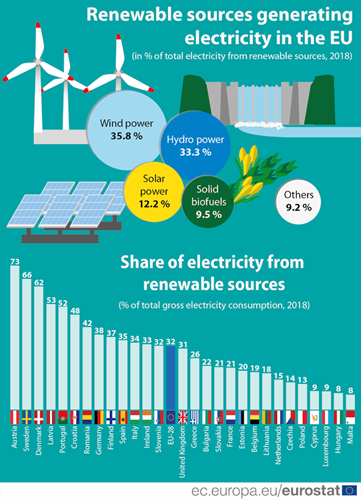 The spread of hydropower is limited, because the local population cannot use it and cannot establish their own power source.

We have a comparison of wind turbines and solar panels. In short, wind power plants are more efficient than solar panels and can supply a large area of households or industries. On the other hand, solar energy is a better alternative for smaller households.

Biomass is a renewable, yet limited source of energy, and is the dirtiest type of green energy. It is made of organic substances (dead plants, etc.), and while burnt, it generates electricity.

Germany has the most wind farms in Europe, followed by Denmark, Belgium, and The Netherlands. Generally, developed countries have the most wind power plants, but they are supporting other countries with money and know-how to install wind turbines.