October 20, 2020
Mostly natural gas can be found next to oil reservoirs. Countries in the Middle East possess more than 40% of the world’s natural gas reserves.

Mostly natural gas can be found next to oil reservoirs. Countries in the Middle East possess more than 40% of the world’s natural gas reserves.

Natural gas is one of the most important and popular fossil fuels. It can occur naturally with crude oil. The natural gas formation took several hundreds of years – then people in China started to utilize it first: with bamboo pipelines they transported the leaking gas beneath the water. This way the salty water was boiled and it became drinkable.

The industrial use of natural gas started only in the 19th century. Transportation was not that developed. Countries with natural gas reserves could use it to power the factories or city lights.

How is natural gas formed?

Naturally, it took hundreds of millions of years while the Earth’s heat, the pressure, and the movement of the layers decomposed plants and animals, turning them into petroleum, oil, and natural gas. 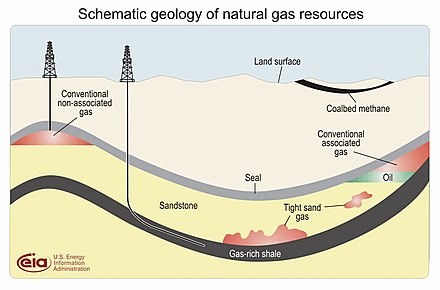 As we dig deeper into the Earth's surface, the possibility of finding natural gas is higher and higher. But where exactly does natural gas come from?

Before extraction, a test well is always drilled, so producing companies can measure and ensure the profitability of natural gas production.

Natural gas reserves by country
Where is natural gas found in the world?

It is clear that Russia and the countries of the Middle East rule this market, the United States only possesses around 5% of the worlds’ natural gas deposits, while China even less (2.4%). In well-developed countries, renewable energy and natural gas are the main sources of energy, because after wind power, or solar energy, natural gas is the least polluting fuel.

U.S: states with the most natural gas reserves:

Countries that are not that developed or do not have enough natural gas, but have other fossil fuels, mainly use coal and petroleum as fossil fuels. In Europe, just a few countries possess natural gas, and most of them import from Russia, which has a strong position and a gas pipeline system all over Europe, and even to the East.

While natural gas extraction and consumption empty our reserves, new locations can be found every day.

How much natural gas is left in the world?

Natural gas consumption is growing every year. Here are the top consumer countries:

The United States consumes almost more than its production, meaning they need to export extra barrels of natural gas. The U.S improved the extraction in the last couple of years, so the country imports less while the consumption is constantly growing. 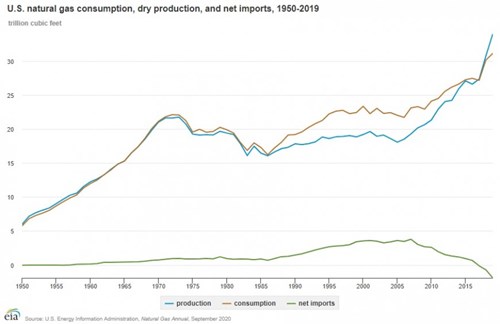 With the world’s aggregated consumption of natural gas, we have this fossil fuel left for ~52 years (with current consumption levels and known/mapped reservoirs). In 2018 an estimated 7,124 trillion cubic feet of natural gas was still available for future use.